Although the returned data is JSON, server response Content-Type is text/plain for some reason.

v is the UID of the card.

Utilize the recover_pk.py script from the root of the Proxmark3 repository, like below:

Go to Advanced Settings on the bottom of the Gmail page.

On the Gmail Advanced Settings page, scroll down to the Routing settings group. Or...

Configure an SMTP relay service to have the settings:

Save the settings and now you can set up the SMTP settings on your email client:

And done! You can now reply from any other name under your domain.

Reversing into the depths of Turkish ID Cards

Now that Ave wrote about TCKK, its time to talk about my side of things.

I was able to sniff out my TCKK certificate back in 2017 but haven't gotten much deeper ever since.

...till 18th of December, 2020. Within 12 hours, I was able to supersede all my previous work with extremely deep work. 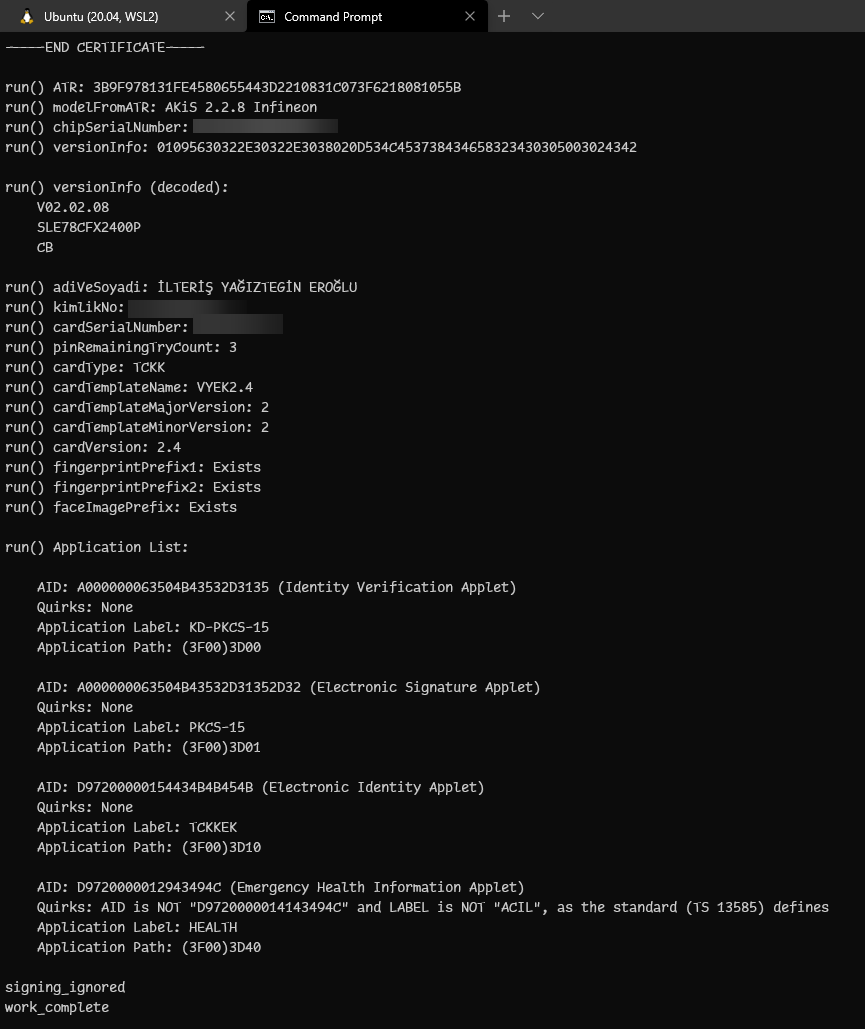 So, how did that happen? Cue e-Government portal logins.

The e-Government portal, e-Devlet, has a login method with TCKK; which I actually use.

The login method is basically a Java Web Applet (fancy way to say dynamic jar download/execution) that interfaces with e-Devlet and the TCKK to sign a challenge nonce and crosscheck the signature.

However, this app is not obfuscated.

And there's a tar like jar packager called jar.

Remove the GUI applet, repackage the rest and there you have it. The basic (and technically the enterprise) API is now accessible to you. Use the TS 13679 standard or decompile the API with FernFlower (included with IntelliJ IDEA) to understand it.

Reading the standard and looking up the API functions it looks like these are accessible without authentication:

Rest either requires PIN1 (which you know) with Role Authentication (which the reading party has to have), or PIN2 (which you don't know and is only used for the other Electronic Signature Applet.)

This is all I dug up within 2 days! I hope to find more.

If you're from TUBİTAK and somehow ended up here, feel free to contact me at tckk <kuyruklu a> linuxgemini <nokta> space!

Writing a simple WHOIS client is more cursed than you think.

I am known for writing cursed JavaScript applets but this one, went above my own charts.

So, lets glance over this curse.

WHOIS is a big free for all. Parsing the output for recursive WHOIS is not only important, but a whole other craftwork.

Now, that was referral parsing but uh; how do you even get the right encoded data?

Right, WHOIS doesn't specify an encoding. Luckily, whois(1) comes to rescue. So this became a thing:

Then there's the conversion of event-driven Node.js TCP stack to async-await style calls.

Then, there was the simple web app. Well that was easier than the WHOIS client.

w.iye.be is a test instance for the code for new-iwhois.

The code is available at GitHub.

It occured to me while watching the Sega Mega Drive/Genesis demo Overdrive by the demo/art group TiTAN, while I was always amazed with the audiovisual work, this exact moment on the demo gets me thrilling every single time (timestamped embed):

God dammit strobe you're a genius.

The same feeling happens on the 1987-93 intro of Tomorrow's World as well (not a timestamped embed but it happens around the scene transition at 0:20):

IMDB says that the tune was “Written and performed by Joe Campbell and Paul Hart”. A big thanks to them and the graphic design team at the time at the BBC who made the magnificent intro.

This “thrill” comes from multiple angles. Like having a somewhat wide tune knowledge or just having a greater respect to the appreciated work.

Moments like these are also the composer's goal. To make them thrilled to be in the moment, pulling them into the wormhole of whats coming next.

I miss these kinds of productions on today's world.

(I started writing this at the beginning of May 2020, and probably finalizing near July; so yeah be warned.)

Ever since I released my writeup about the (in)security of Türk Telekom's home gateway management, the VoIP config I found stuck in my head.

This led to many attempts to create a large home phone system. I failed hard. However in the process of doing that, I learned how cursed SIP services are and even got a free Cisco IP Phone from an ISP contact.

For example; Türk Telekom's “SIP server” is actually an IMS (IP Multimedia Subsystem) gateway from ZTE and sends incoming calls with the tel: URI instead of the usual sip: URI.

Asterisk doesn't support tel: URIs at all. Kamailio kinda does, but breaks very often due to the VoIP config I mentioned above. 3CX worked at the time I tested (around mid 2019), however I really don't like commercial “licensing” of products utilizing SIP.

FreeSWITCH from SignalWire on the other hand... It. just. works.™️ It has its own quirks as well, but I'll go into that a bit later.

There are many issues other than this too, however this is just the beginning of many problems a PBX trunk operator can face.

“I thought pressing 0 would go to the main menu!”

Let's talk about DTMF. But not its analog perspective of it but rather how its (mis)implemented on the digital world.

Today, we have a few different DTMF signaling methods. All comes down to two types.

Inband is still in-call tone-generation. However some implementations do it slightly different than others (ie. event “packets” in the RTP stream (see RFC 4733 and the deprecated RFC 2833)).

Out-of-band is literally done out of RTP. You either send the tone “map” via a SIP INFO or SIP NOTIFY message. In larger telco operations, SS6 and/or SS7 are utilized. (also see RFC 4733 and the deprecated RFC 2833 because somehow both of these contain descriptions for both types????)

On today's VoIP providers, none of them fully detail what method (and how) they support. And that's where the fun starts.

Twilio supports both inband and OOB signaling (as its defined in RFC 2833) however if you do SIP trunking, make sure that you use OOB because most of the time their “inband” doesn't seem to work.

If you double trunk and have a Cisco phone connected, well good luck.

“OH MY GOD WHAT IS THIS CONFIGURATION”

Well, welcome to the wonderful hell of PBX configuration. Unless you have a polished frontend like FreePBX (which utilizes Asterisk) etc. you need to mess with files. A crap ton of them.

Asterisk is by far the easiest, if you use the legacy dialplan and peer configurations.

FreeSWITCH however, consists of hundreds of XML files interconnected with each other in such way that one variable in one file eventually gets overridden by another file. If you don't check your configuration at least 100 times, you'll probably realize that you have RTP Early Media off and Mixed RTP Codec Negotiation disabled.

This is a short rant about FreeSWITCH's SpanDSP module. For no certain reason, it only does T.30/38 and both are broken in some ways. I just gave up trying to get it working.

Yeah, once you set up your trunks and get it to work, never ever look back to it. At least that's what I've done.

So, I finally made a blog. I have to thank Ave for introducing Writefreely to me.